Emil Moonstone is an Italian singer and composer.

Disappointed, by Emil Moonstone & the Anomalies

2019, the year of debut. It's been a fantastic year. Thank you all for your support, for your time, for this high honor. See you…

The Light Behind Your Eyes, by E.Moonstone & The Anomalies

from the album Sparkles in the Dark vol.5 - Radio Darkitalia edition

Our new unreleased "The Light Behind Your Eyes" You can find it in the compilation "Sparkles in the Dark vol​.​5" - Radio Darkitalia edition. darkitalia.bandcamp.com/track/the-light-behind-your-eyes

The Light Behind Your Eyes, by E.Moonstone & The Anomalies

from the album Sparkles in the Dark vol.5 - Radio Darkitalia edition

🦇SPARKLES IN THE DARK V will be OUT on the 10th of DEC!!!🦇 It features the new single "THE LIGHT BEHIND YOUR EYES" Stay tuned!!!

CD and LP are on special offer!!! 1 copy 10 € (plus shipping) For contact info@emoonstone.it

The Youtube channel where to see all our videos. www.youtube.com/channel/UCeCHB_QjBkF9oBtbBFHH7bQ

Emil Moonstone is an Italian singer and composer. Emil Moonstone will be shortly undertaking what he calls “a solo parenthesis” with an album entirely writte...

Last rehearsal before the holidays

In the train - Emil Moonstone & the Anomalies

In the train - Emil Moonstone & the Anomalies - Disappointed 2018

Better to die righteous than to burn for fear. So, watch the video and ... fired.

But is this real life? So why … another fall So why ... It never stops

Online the New video - "FALL" Directed by Doni That being said, enjoy the show 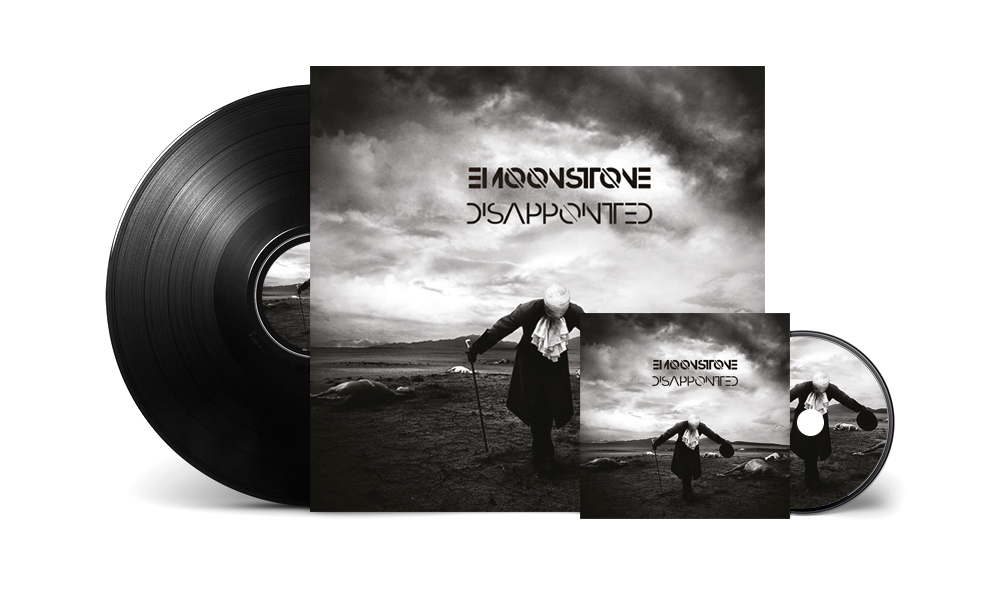 “Disappointed” is the first album by Emil Moonstone, the solo project of the Two Moons voice.

An album in which, apart from  having composed all the songs, plays  most of the instruments during the recording sessions.

Nine tracks, psychedelia, noise effect, study experiments, are intertwined in a maliscious record, but at the same time full of feelings.

“Disappointed”, is presented by what is already the apocalyptic cover, edited by the artist Stefano Bonazzi, leaving no room for imagination: it is a raw, true and visceral disc.

The central theme in the album narrates  of failures, of things that somehow end up in pieces, of a gloomy future, of disappointment for the failure of the human race.

Musically speaking, the songs are developed on the basis of drum machines in which noise guitar riffs suddenly leave room for a break marked by a dull trip-hop, and then resume the central plot and its psychedelic excursions.

“Disappointed” is almost an account of where we have ended up. So it is not a casual choice to end the album with “Hurt”, a placid finale in which the NIN cover (or if you prefer, the cover of the Johnny Cash cover), seems to want to bring a thread of order, into the chaos of sounds and words.

The album turns out to be difficult, Moonstone does not spare himself  and records in this project all his inspirations, the splinters of madness, extravagance, tenacity and impudence, all attitudes that distinguish him.

Thus the voice of Two Moons decides today to go beyond the collective schemes, wounding the common perception, making sure to turn the purists nose up, striking the susceptibility of many.

But this is E. Moonstone, this is “Disappointed” because when a man is “disappointed” he tends not to use half terms.

In the train - Emil Moonstone & the Anomalies

Emil Moonstone & the Anomalies - This is Love - Disappointed 2018

Il nostro nuovo inedito "The Light Behind Your Eye

A unidentified object was moving across Tokyo ...

To really understand how whack Tokyo is, You have

With Steve Wynn (The dream syndacate)

Emil Moonstone and the Anomalies

Emil Moonstone and the Anomalies